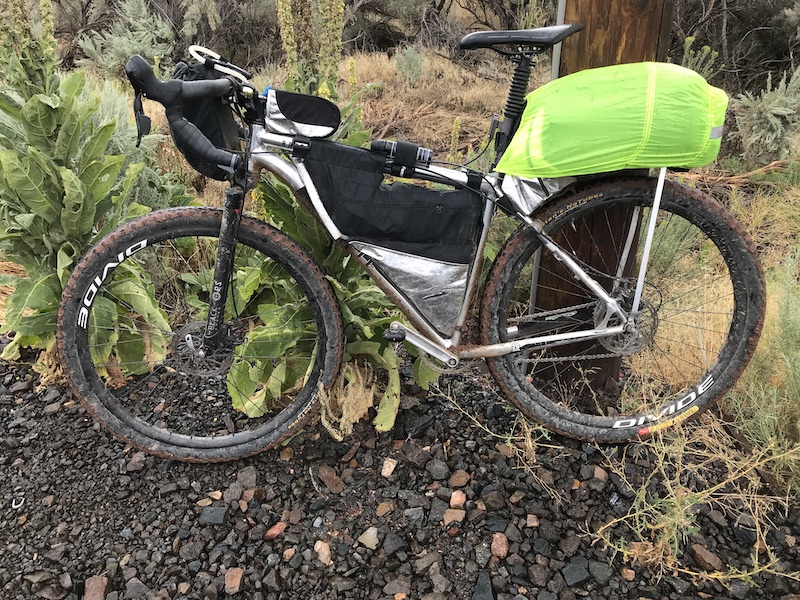 The naming of things is a powerful human instinct. Without a name for an item or an event we are forced to come to terms with its specific qualities and its uniqueness. Once we have a name we can use that name to sum up all those unique qualities which we remember and can list off, but we no longer have to confront them, we can just use that name. The naming of bicycle genres has taken off in the last few years and I really don’t expect it to stop.  Many of these names define broad swathes of the sport: downhill, road, fat bike; but with the infill in between different sub-species of bicycle we get categories that are hard to differentiate from one another: All-road vs. gravel bike? Or all-mountain vs. trail bike? While there may be some differences there do they really require their own category? Is this just a marketing exercise, or is this just another display of human nature?

I came to this conundrum while converting my winter commuter bike into my summer touring bike. I was using the name “monstercross” for this style of bicycle but I realized that this term might be a little dated and that the new term for this type of bike is “adventure bike”.  I don’t have a very good handle on what defines either of these bicycle genres but if I had to I’d say to make it a monstercross it needs to have drop bars and to be an adventure bike it needs rack mounts. Clearly this is not a serious definition, but I clearly couldn’t care less about the naming of bicycles. I am concerned with the riding of bicycles. 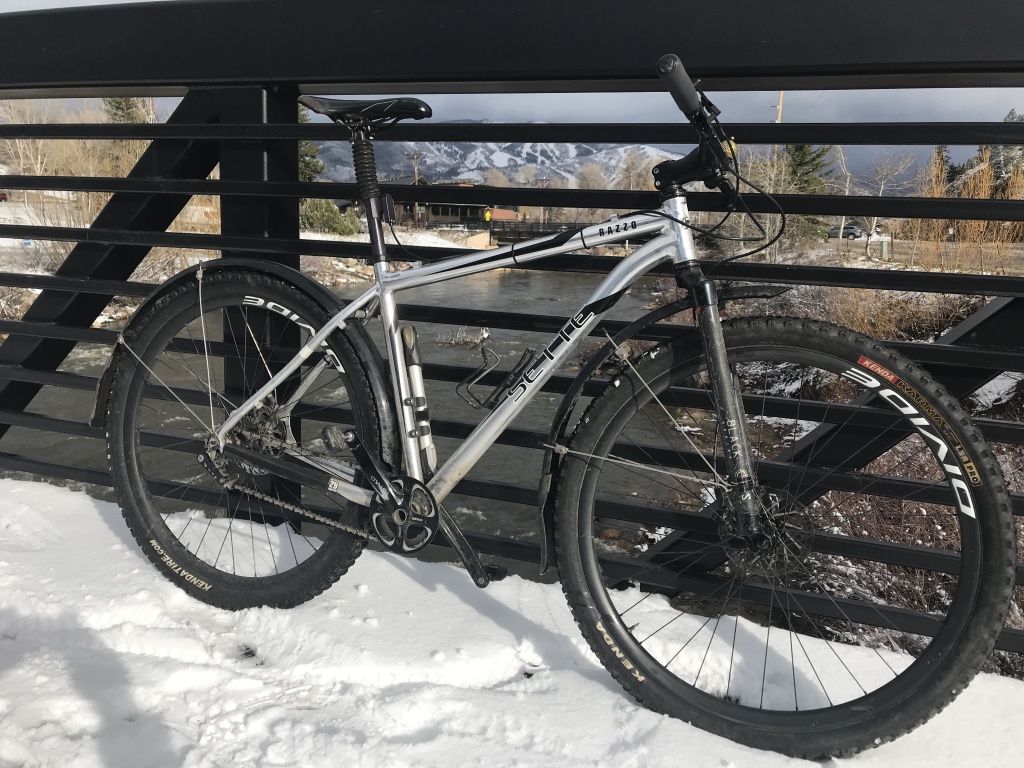 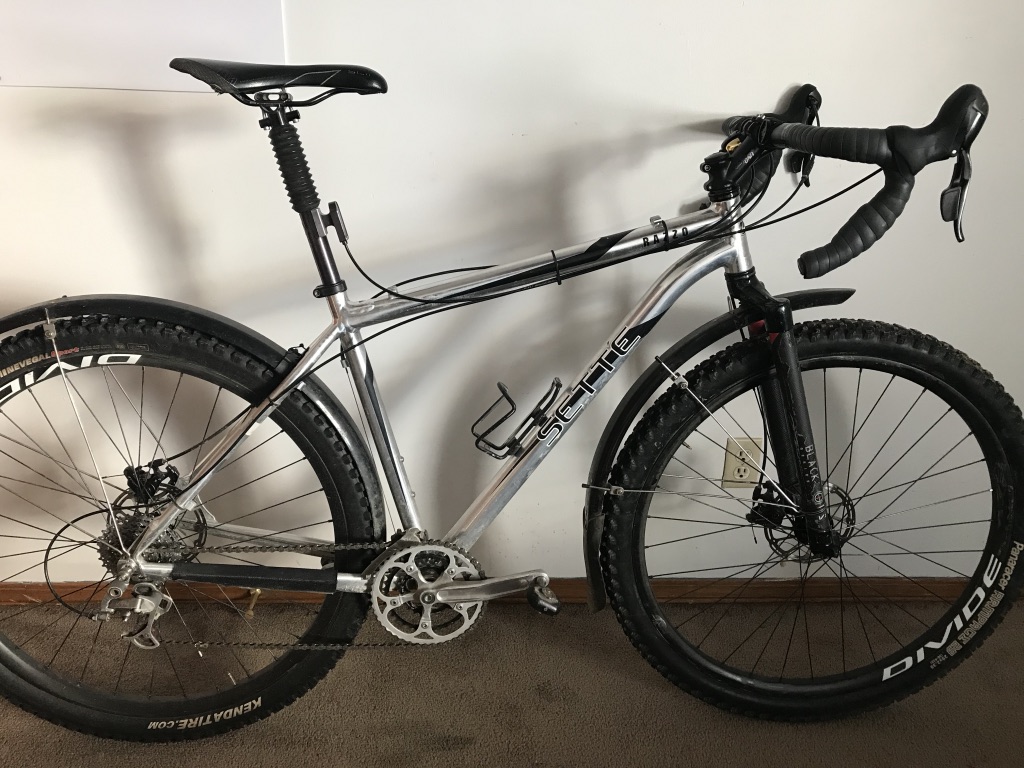 The idea of putting drop bars on a mountain bike had to wait until we came up with the idea of the mountain bike. The first bicycles were made for rough conditions. I have pointed out before that the invention of the bicycle precedes the invention of asphalt by over 40 years. It was pointed out to me that the ancient Babylonians invented asphalt but when a technology is lost for 3000 years that doesn’t really count. While Charlie Cunningham deserves some credit for putting drop bars on a mountain bike it was racing legend John Tomac who put drop bars on his mountain bike to help transition between road racing and off-road racing in the early ‘90’s and made a good impression by winning both cross-country and downhill races on them.

I had hoped to build my summer touring bike with as few additional purchases as possible, with a closet full of old bike parts I came close, but still required new shifters, brakes, a stem and a pair of extra wide handlebars. It seemed like a straightforward job, but once I accumulated my parts stash I realized that there weren’t many parts that weren’t being changed out. The only parts staying on the bike were the wheels, the fork and the seat and seatpost. Actually I changed the fork too, but then I changed it back.

While my drivetrain components could be described as vintage, (9 speed forever, baby!) they worked well and the triple chainring setup gave me the confidence that I wouldn’t be running out of gears on either end of the spectrum. The new TRP brakes worked well and deserve a review of their own. The new 50cm wide handlebars also deserve a review of their own and similar to the JK 48’s they provide a full 50cm width at the hoods and all that width makes it almost impossible to go back to a narrow set of bars. The build went together smoothly except for having to zip tie the remote lever for my dropper seatpost on to the handlebar. I assumed those zip ties were going to last about a week and made sure to bring a stash of extras with me but the first two I put on lasted all summer. The dropper post is just like the wide bars in one way, once you get used to it, it’s hard to go back, and speaking of backs, my lower back really likes the dropper post and that is reason enough to keep it on the bike. 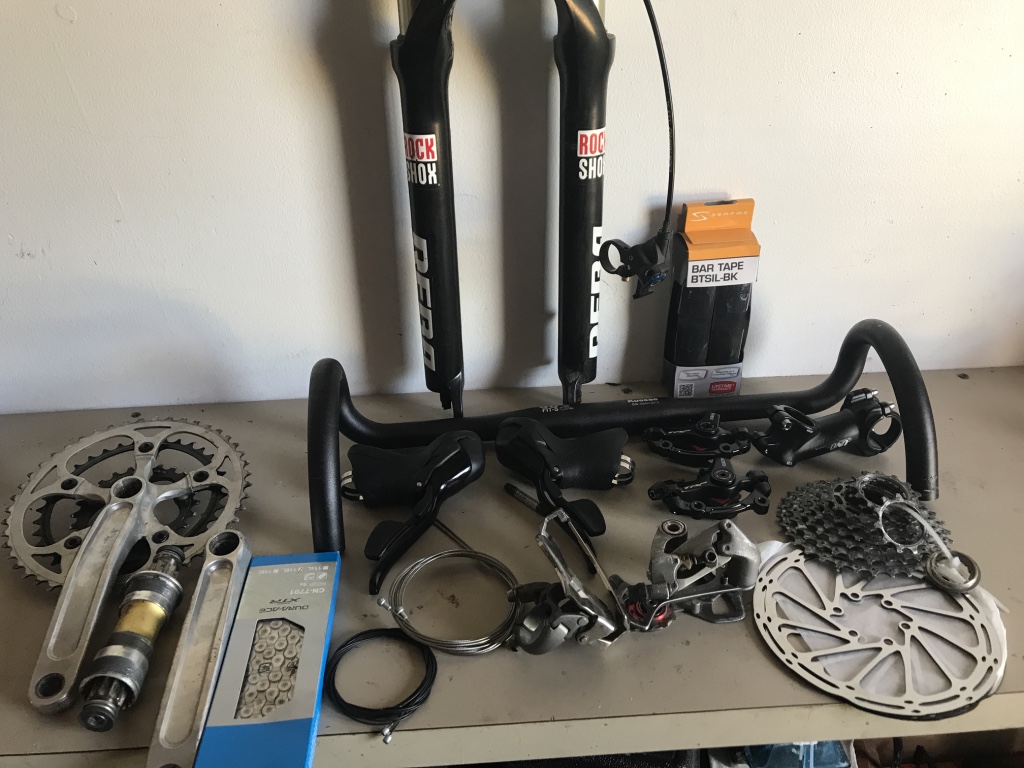 A Pile of Parts

Loaded Up in the Rain

There are a whole new generation of bicycles designed for both 29er wheels and drop bars like the Moots Baxter and the Salsa Fargo. These bikes have tweaked the geometry to optimize handling with a drop bar position. The frames feature a shorter top tube and a longer head tube than a traditional mountain bike as well as a lower bottom bracket which adds up to a bike that handles like a road bike but with the tires to roll through the rough stuff. This is not the bike I have, my bike handles like a truck, and not like a nice new truck, but like and old truck with a lot of miles on it. The bike doesn’t respond well to leaning into a corner it prefers to be steered through the corner and even then it takes a casual half a second to respond to any steering input. Instead of cutting or slicing through corners it plows through corners. I tried changing out the fork, I changed the tires and even played with the number of spacers under my stem but it’s hard to fix your frame geometry by swapping parts. There is something to be said for the inherent stability of a bicycle that doesn’t want to turn and once I loaded the bike up with my touring gear it felt very stable and really didn’t handle any worse. Just like I had to adapt to the new shifters with the paddles in different places and adapt to my new brakes with their extra modulation I just had to get used to the slow handling.

There are only a few improvements I can think of for my monster that don’t go way over budget. I’d like some new brake pads for the TRP brakes to give them some more bite. The stock pads do a great job with a nice gradual grab on the rotors, but I like more of an instant lock-up feel to my brakes and am looking to replace those pads with some metallic pads.  I would also like to try some new tires on my rig. There are all sorts of new tires in the 40mm to 50mm size range that I think would work very nicely for the riding that I like to do. I also have a closet full of old tires dry rotting away and have told myself more than once that I’m not buying any more tires until I wear those out, so when you see me skidding wildly like an 8 year old you’ll know what I’m up to.

While I would like a new Moots Baxter with a full electric groupo on it and a assortment of carbon parts I have to work for a living and the equation we working folks have to face is more work=less riding. There is no point in having a really nice bike collecting dust when you take the bike you already have and go ride through the dust. We might think that we want something new and shiny, but what we really want is more miles.