by thedirtyroads | The Colorado Route 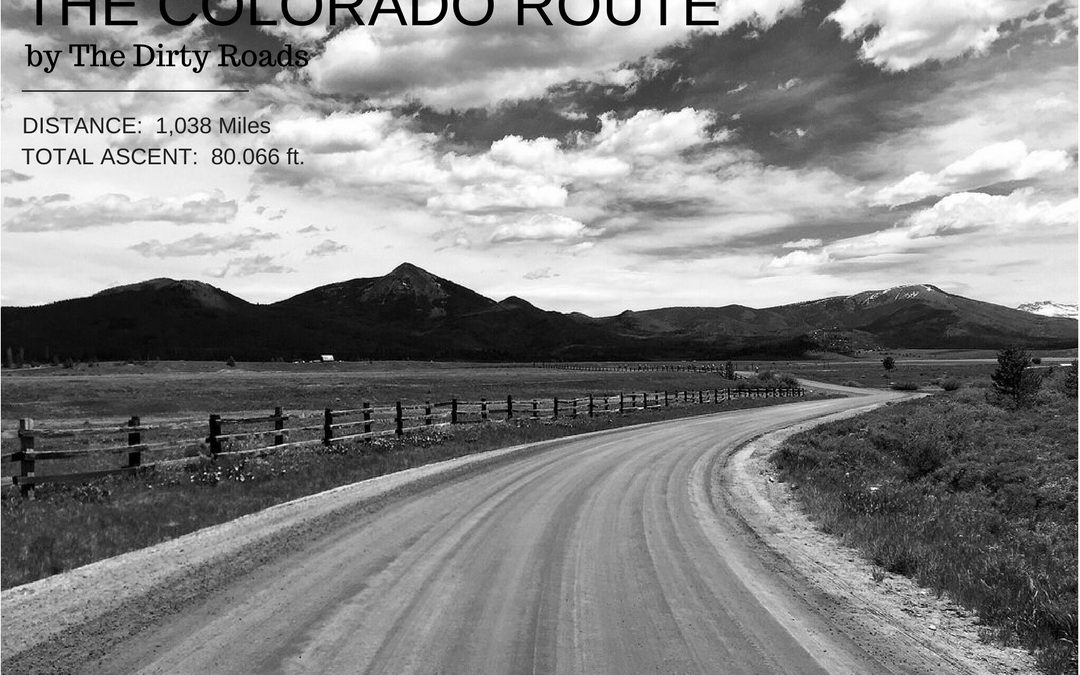 The Colorado Route is Colorado’s premier dirty road cycling tour. Coming in at just over one thousand miles the Colorado Route delivers a grand variety of terrain from the populated flatlands of the Front Range to the spectacularly wide open expanses of the high valleys and a huge variety of backcountry mountain roads and passes. Starting and finishing in the city of Fort Collins the Colorado Route takes in a number of small towns along the way including Hayden, Silt, Paonia, Saldia, Gypsum and Frasier. The route is made up of mostly dirt roads with some stretches of remote pavement and a few sections of necessary highway. The route is designed for self-supported backcountry camping since the distance between towns is often too much for a single day’s ride.

The Colorado Route dishes out about 80,000 feet of vertical ascent and descent over its nearly 1000 miles, the highest point of the route comes at the top of Weston Pass with an elevation of 11,952 ft. with the second highest point the 11,939 ft. Hagerman Pass just 33 miles away.
The Colorado route is open from late June or early July until late September or early October. The possibility of significant snow drifts across the high passes well into July is the key factor for the opening date and a September snowstorm may turn the same passes into a very difficult crossing. The fierceness and suddenness of Colorado’s weather should never be underestimated in any month of the year. You should be prepared for full-on winter-like conditions going over the top of the high passes and/or be prepared to wait out any storm. The Colorado Route is meant to be ridden as a self-supported backcountry camping route. You should be able to carry 3 days of food and an entire day’s water supply with you. There are many re-supply opportunities and water sources along the way but you will have limited cell phone coverage and may go for most of the day without seeing another person along parts of the route if something goes wrong. There are also parts of the route that are impassable when wet and you may need to wait out a storm whether from the mud or the lightning so carrying extra supplies is important. The entire route, with the exception of Rollins Pass and the bike paths, can be driven by a high clearance vehicle. A 4-wheel drive may be necessary for some of the high passes and for bad weather but there is an option for vehicle support. Starting from Fort Collins and riding The Colorado Route counter-clockwise it leaves “The Fort” and goes due north before turning west and crossing I-287 to the Cherokee Park Road which continues for over 40 miles taking you to the Laramie River. From the Laramie River Road, you take the Hohnholm Lakes Road and climb up over the Medicine Bow Mountains and descend into the wide-open expanses of North Park. After turning right in Cowdrey, you’ll continue across North Park into the northern extent of the Park Range where you will cross the Encampment River and venture briefly into Wyoming to circle Hog Park Reservoir before turning south riding back toward Colorado. Passing the flank of Hahn’s Peak and the shores of Steamboat Lake the Colorado Route climbs over the Elk Mountains and drops into California Park and then down to Hayden on the Yampa river. Passing over Hayden Gulch and into the Williams Fork valley the Colorado Route climbs over Ripple Creek Pass to the White River valley and descends to Buford where it turns onto the epic New Castle-Buford road and then thru the town of Silt to cross the Colorado River.

Taking a remote dirt route between Silt and Paonia you will travel south thru Crawford and on to the longest stretch of pavement on the Colorado Route the very scenic and seldom traveled CO Hwy. 92 which ends as it crosses the top of the Blue Mesa Reservoir’s dam. Climbing up and over Los Pinos Pass and into the Cochetopa Basin The Colorado Route connects briefly with US Hwy. 50 before going over the historic Marshall Pass and down into Salida. From Salida, the Colorado Route heads north into South Park and then over Weston Pass, Hagerman Pass, and Crooked Creek Pass before descending into Gypsum and taking a dirt shortcut over to the Colorado River Road. You will follow the Colorado River through the tiny towns of Burns, McCoy and Radium, past Kremmling and into the Williams Fork Mountains dropping into Frasier only to cross US Hwy. 40 and begin the ascent of Rollins Pass. Crossing the Continental Divide at the summit you begin a long descent down to Rollinsville, then along the paved but spectacular Peak to Peak Highway to Gold Hill and down to the plains where you will take a few backroads to connect you into the bike path system outside of Loveland and follow it back to Fort Collins.